July 19, 2021
Editorial & Advertiser disclosureEditorial & Advertiser disclosureOur website provides you with information, news, press releases, Opinion and advertorials on various financial products and services. This is not to be considered as financial advice and should be considered only for information purposes. We cannot guarantee the accuracy or applicability of any information provided with respect to your individual or personal circumstances. Please seek Professional advice from a qualified professional before making any financial decisions. We link to various third party websites, affiliate sales networks, and may link to our advertising partners websites. Though we are tied up with various advertising and affiliate networks, this does not affect our analysis or opinion. When you view or click on certain links available on our articles, our partners may compensate us for displaying the content to you, or make a purchase or fill a form. This will not incur any additional charges to you. To make things simpler for you to identity or distinguish sponsored articles or links, you may consider all articles or links hosted on our site as a partner endorsed link.

LONDON (Reuters) – Sterling fell to a three-month low on Monday even as most COVID-19 restrictions in England were lifted, as a cautious tone in global markets meant riskier currencies lost out in favour of the safe-haven dollar.

Britain faces a new wave of COVID-19, but Prime Minister Boris Johnson is lifting most restrictions in England in what some have dubbed Freedom Day. Johnson has urged the public to remain cautious.

Stock markets fell in the Asian and early European sessions as a surge in worldwide coronavirus cases spooked investors. Wall Street was set to open lower.

Last week, the pound had its worst week in a month versus the dollar. The downward turn continued on Monday with sterling hitting $1.3703 at 0946 GMT, its lowest since April 13.

“I think the pound is basically being influenced by general risk appetite as opposed to anything specifically geared towards the UK itself,” said Ned Rumpeltin, head of European currency strategy at TD Securities.

Rumpeltin said that the pound looks vulnerable to further downside pressure due to low risk appetite and that he was watching $1.3670 as the level at which to reassess the currency’s outlook.

Britain has the seventh highest death toll in the world and is forecast to soon have more new infections each day than it did at the height of the second wave of the pandemic. But it is ahead of its European peers in terms of vaccine rollout.

“The world will be watching the U.K. experiment with huge interest,” wrote Deutsche Bank strategist Jim Reid in a note to clients.

“It could show a pathway back towards normality or it could be a warning to even heavily vaccinated countries that COVID will be a problem for a decent length of time still.”

Positioning data showed that speculators’ net long position on the pound – bets that the pound will strengthen – was cut to its smallest since January 2021, in the week to July 13. 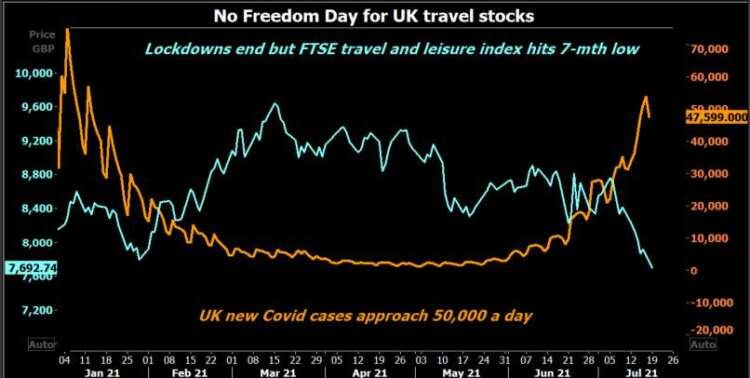 For the week ahead, retail sales data and flash PMI surveys both on Friday, will be closely watched.

A European Central Bank (ECB) meeting on Thursday is also in focus. Two weeks after unveiling its closely anticipated strategy review, the ECB will face questions on what its new 2% inflation target might mean for policy.

Inflation and the Bank of England: what its rate-setters are saying

Orchestrating the Digital Journey – A Must for...

Most Australian lawyers and accountants are concerned about...

Five strategies to support employees through the cost-of-living...

Venture capitalists can improve success by considering prior...

July 21, 2022
We use cookies on our website to give you the most relevant experience by remembering your preferences and repeat visits. By clicking “Accept All”, you consent to the use of ALL the cookies. However, you may visit "Cookie Settings" to provide a controlled consent.
Cookie SettingsAccept All
Manage consent