Home News ECB raises interest rates again, cuts bank subsidies
Our website publishes news, press releases, opinion and advertorials on various financial organizations, products and services which are commissioned from various Companies, Organizations, PR agencies, Bloggers etc. These commissioned articles are commercial in nature. This is not to be considered as financial advice and should be considered only for information purposes. It does not reflect the views or opinion of our website and is not to be considered an endorsement or a recommendation. We cannot guarantee the accuracy or applicability of any information provided with respect to your individual or personal circumstances. Please seek Professional advice from a qualified professional before making any financial decisions. We link to various third-party websites, affiliate sales networks, and to our advertising partners websites. When you view or click on certain links available on our articles, our partners may compensate us for displaying the content to you or make a purchase or fill a form. This will not incur any additional charges to you. To make things simpler for you to identity or distinguish advertised or sponsored articles or links, you may consider all articles or links hosted on our site as a commercial article placement. We will not be responsible for any loss you may suffer as a result of any omission or inaccuracy on the website.
News

October 27, 2022
Editorial & Advertiser disclosureEditorial & Advertiser disclosureOur website provides you with information, news, press releases, Opinion and advertorials on various financial products and services. This is not to be considered as financial advice and should be considered only for information purposes. We cannot guarantee the accuracy or applicability of any information provided with respect to your individual or personal circumstances. Please seek Professional advice from a qualified professional before making any financial decisions. We link to various third party websites, affiliate sales networks, and may link to our advertising partners websites. Though we are tied up with various advertising and affiliate networks, this does not affect our analysis or opinion. When you view or click on certain links available on our articles, our partners may compensate us for displaying the content to you, or make a purchase or fill a form. This will not incur any additional charges to you. To make things simpler for you to identity or distinguish sponsored articles or links, you may consider all articles or links hosted on our site as a partner endorsed link.

By Balazs Koranyi and Francesco Canepa

FRANKFURT (Reuters) – The European Central Bank raised interest rates again on Thursday and announced it was changing the terms of its ultra-cheap loans to commercial banks in a bid to shrink its bloated balance sheet and fight off a historic surge in inflation.

Worried that rapid price growth is becoming entrenched, the ECB is raising borrowing costs at the fastest pace on record, with further hikes almost certain as unwinding a decade’s worth of stimulus will take it well into next year and beyond.

The central bank for the 19 countries that use the euro raised its deposit rate by a further 75 basis points to 1.5% – the highest rate since 2009. Until as recently as July, ECB rates had been in negative territory for eight years.

“The Governing Council took today’s decision, and expects to raise interest rates further, to ensure the timely return of inflation to its 2% medium-term inflation target,” the ECB said in a statement.

The euro dropped and European government bond yields slid after the announcement, which was in line with market expectations.

At a news conference, ECB President Christine Lagarde noted that while the Ukraine war and other global uncertainties meant the euro area economy faced a number of risks to the downside, inflation risks were skewed upwards.

“Incoming wage data and recent wage agreements indicate that the growth of wages may be picking up,” she said of the possible emergence of future wage-price spirals, stressing the bank was monitoring expectations about long-term inflation.

Markets expect the pace of the hikes to slow somewhat, with the deposit rate hitting 2% in December, then peaking at around 3% some time in 2023, although the unusually volatile outlook makes this timeline prone to changes.

Asked about concerns expressed by some euro zone governments that the ECB’s rate hikes could throw the region into recession, Lagarde said the ECB had a mandate to fight inflation and urged governments to carefully target any support for citizens through the energy crisis so as not to make inflation worse.

“Everyone has to do their job. Our job is price stability,” she said. “We have to do what we have to do. A central bank has to focus on its mandate.”

The ECB offered no hints for now about plans to start winding down its bond holdings, after hoovering up trillions of euros of debt issued by euro zone governments since 2015. 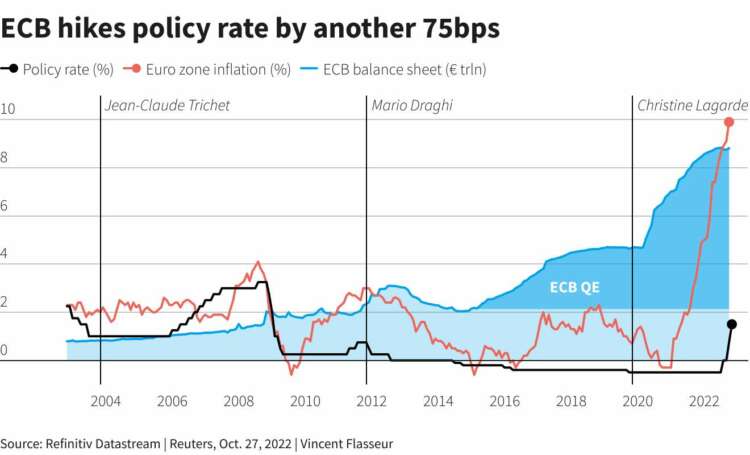 With euro zone inflation hitting 9.9%, the ECB also took the first step toward shrinking its 8.8 trillion euro balance sheet, a move that is likely to raise borrowing costs further and may act as a sort of disguised rate hike.

In a move which may be fought commercial banks, it curbed the subsidy it provides to such lenders through 2.1 trillion euros worth of ultra-cheap three-year loans called Targeted Longer-Term Refinancing Operations, or TLTROs.

“In view of the unexpected and extraordinary rise in inflation, it (TLTRO) needs to be recalibrated to ensure that it is consistent with the broader monetary policy normalisation process and to reinforce the transmission of policy rate increases to bank lending conditions,” the ECB said.

It said the interest rate on TLTRO operations will in future be indexed to the average applicable key ECB interest rates, which will encourage early repayment of the loans.

The ECB said further pricing details would be made available at 1345 GMT. In another change, the ECB also said that minimum reserves would be remunerated at the deposit rate, rather than the main rate, which is 50 basis point higher.

GRAPHIC – The race to raise rates 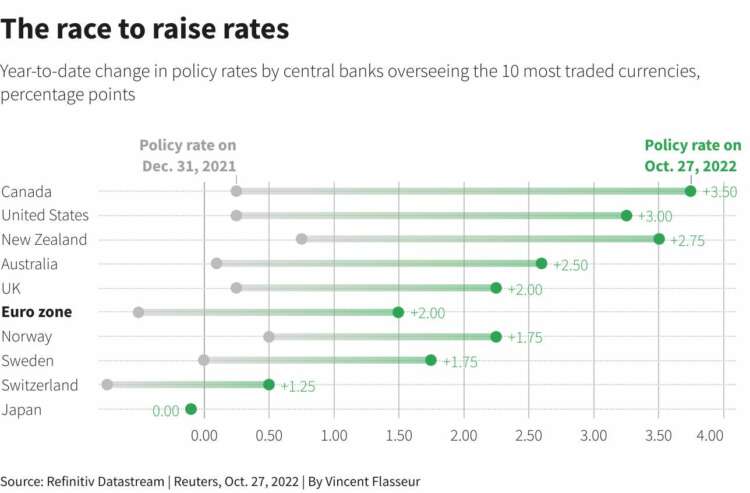 Having borrowed at zero or even negative rates at a time when the ECB’s main worry was persistently low inflation, banks can now simply park TLTRO cash with the ECB and enjoy a risk-free return that rises with each deposit rate hike.

This is politically contentious in itself, but an abundance of liquidity is also keeping money market rates depressed and preventing the ECB’s rate hikes from being fully passed through via the banks to businesses and households.

The biggest chunk of TLTRO loans, worth around 1.5 trillion euros, expire next June. Thursday’s changes may encourage banks to repay them as soon as December, shrinking the ECB’s balance sheet in the process.

The bank confirmed its guidance on reinvestments of bonds maturing in its bond buying schemes, confounding some expectations for a small change that would hint at a wind down of the Asset Purchase Programme next year.

Factbox-European gas prices: why have they been falling?

Bank funding for renewables stagnates vs oil and...

January 20, 2023
We use cookies on our website to give you the most relevant experience by remembering your preferences and repeat visits. By clicking “Accept All”, you consent to the use of ALL the cookies. However, you may visit "Cookie Settings" to provide a controlled consent.
Cookie SettingsAccept All
Manage consent