April 21, 2022
Editorial & Advertiser disclosureEditorial & Advertiser disclosureOur website provides you with information, news, press releases, Opinion and advertorials on various financial products and services. This is not to be considered as financial advice and should be considered only for information purposes. We cannot guarantee the accuracy or applicability of any information provided with respect to your individual or personal circumstances. Please seek Professional advice from a qualified professional before making any financial decisions. We link to various third party websites, affiliate sales networks, and may link to our advertising partners websites. Though we are tied up with various advertising and affiliate networks, this does not affect our analysis or opinion. When you view or click on certain links available on our articles, our partners may compensate us for displaying the content to you, or make a purchase or fill a form. This will not incur any additional charges to you. To make things simpler for you to identity or distinguish sponsored articles or links, you may consider all articles or links hosted on our site as a partner endorsed link.

By Timothy Gardner and Jarrett Renshaw

WASHINGTON (Reuters) – As a candidate, Joe Biden made climate change a pillar of his campaign for the White House, promising to decarbonize the U.S. economy, end drilling on public lands, and lead the world in a historic shift away from fossil fuels.

But more than a year into his presidency, Biden has instead been forced by rampant inflation and a war in Europe to prioritize energy security, leading his administration to unleash record amounts of crude oil from strategic reserves and to urge drillers to pump harder to keep up with demand.

The jarring shift in Biden’s energy policy priorities reflects the difficulties any U.S. administration might face in attempting a sweeping, decades-long reform of the country’s massive energy economy to curb global warming while simultaneously assisting geopolitical allies and keeping consumer prices in check.

Failing to achieve that balance could have big political consequences for Biden’s fellow Democrats in November’s mid-term elections: conservatives will blame the party if pump prices stay high, while progressives will punish it if it backslides on its climate promises.

“The reality is there has to be short-term costs for long-term gain and I’m not sure this administration is willing to pay the price,” said Ed Hirs, an energy economist at the University of Houston, referring to the political and financial costs of fighting climate change.

White House spokesperson Jen Psaki, asked this week whether the president was still confident the U.S. could hit his climate targets given the headwinds, didn’t forecast success. â€œWe are continuing to pursue it, and we are going to continue to do everything we can to reach it,” Psaki said.

On the campaign trail, Biden had pledged to put the nation – the world’s largest oil consumer – on the path to zero out carbon emissions by 2050 and transform the power grid to be carbon-free by 2035, lofty goals that he hoped to set in motion during the first two years of his administration while his party had razor-thin majorities in Congress.

Renewable energy made up just 12% of the oil, coal, and natural gas dependent U.S.’s energy consumption in 2020, vs. over 20% in the European Union.

Biden’s multi-billion dollar climate change legislation, which contained many of the steps to reach those goals has been stalled in Congress amid opposition from conservative Democratic Senator Joe Manchin and Republicans. Senate Democrats need the support of all 50 members plus Vice President Kamala Harris to pass the bill via a party-line vote known as reconciliation.

“He can’t make good on his climate commitments without the reconciliation package,” said Jamal Raad, executive director of Evergreen Action, an advocacy group that helped craft some of the legislation.

“The upcoming weeks truly represent his last chance he has to get it through and his legacy is at stake. We are in a make-or-break moment.”

The Build Back Better Bill would have poured $300 billion into tax credits for producers and buyers of low carbon energy and would extend tax breaks for renewable energy and launch new ones for nuclear power and speed the transition to electric vehicles. Manchin, from coal-producer West Virginia, opposes it as too costly, and Republicans have slammed it as expensive and dangerous to the economy.

Behind the scenes, there are no signs that the White House and Manchin are any closer to a deal on massive spending bill. The two sides are not operating on any specific timeline and many of the key details remain unresolved, according to three sources familiar with the discussions.

Biden also pledged during his campaign to halt federal drilling auctions to assist in the fight against climate change, but that effort has been stymied by a court challenge from Republican-led states.

The administration said late last Friday before a holiday weekend that it was resuming public lands leasing, albeit on far fewer acres than initially proposed, after the court ordered it to do so.

Meanwhile, the administration has been forced to reckon with a potent mix of soaring global consumer energy demand after the darkest days of the COVID-19 pandemic and Russiaâ€™s invasion of Ukraine that has crimped global oil supplies.

The Biden administration imposed sweeping punitive sanctions on Russia that have curtailed one of the world’s top oil and gas producer’s supplies to global markets, a factor that pushed gasoline to record highs last month above $4.30 a gallon and helped hike inflation to 40-year highs.

The White House has turned to the fossil fuel industry for help keeping pump prices in check. The administration tapped the nation’s oil reserves to curb prices, has pleaded with domestic producers to drill more, and encouraged everyone from OPEC kingpin Saudi Arabia to Brazil to increase production.

To be sure, the Biden administration has also taken several executive actions to address the climate crisis, including tightening federal regulations on vehicle emissions, hydrofluorocarbons and methane leaks, and announcing the administration would purchase electric vehicles for the federal fleet and make federal buildings energy efficient. It also re-entered the Paris climate agreement that pushes countries to make commitments to cut emissions that get tougher over time.

But experts say Biden will struggle to meet his climate targets without passing the brunt of his climate legislation.

Amy Myers Jaffe, a research professor and managing director of the Climate Policy Lab at Tufts University, said Biden will likely need to compromise on the climate legislation to get it through, if it happens.

“I don’t see it as a comprehensive bill,” she said. “I think it would be more targeted legislation to address immediate energy concerns and the interest in making a long-term pivot to enhance our competitiveness in clean energy, which is, in the end, the future for U.S. exports of energy technology.”

Tellingly, White House climate advisor Gina McCarthy is expected to step down from her post as early as next month. McCarthy, a trusted Biden aide and regulatory expert, was supposed to lead the administration’s efforts to implement the climate change legislation and her departure signals some skepticism at the possibility of its passage. 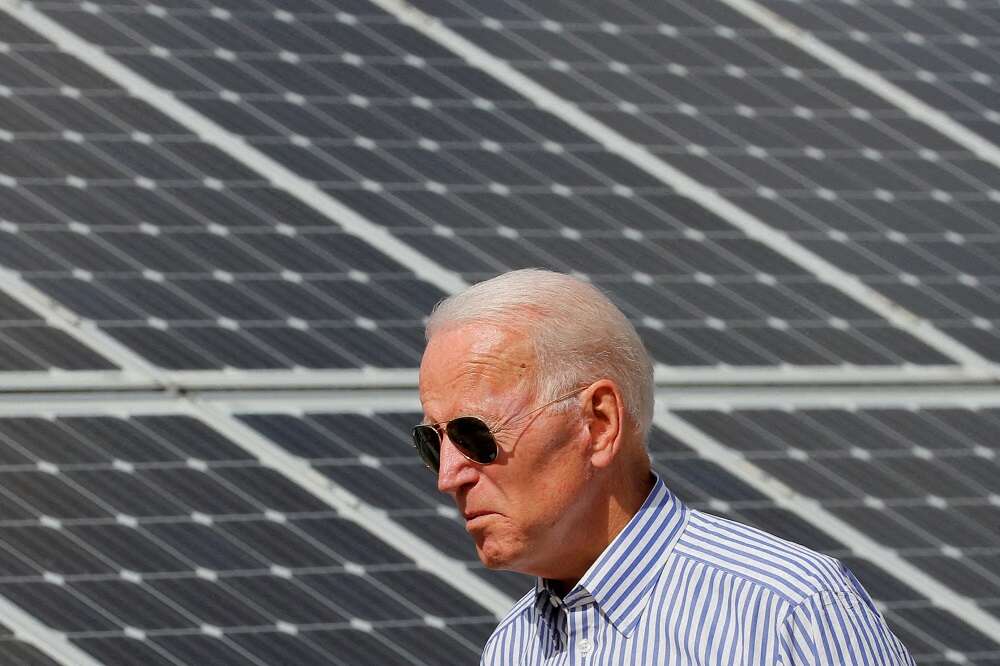 SUPERSTARS BACK IN TAHOE FOR AMERICAN CENTURY GOLF...

Explainer-What will a Marcos presidency in the Philippines...

May 9, 2022
We use cookies on our website to give you the most relevant experience by remembering your preferences and repeat visits. By clicking “Accept All”, you consent to the use of ALL the cookies. However, you may visit "Cookie Settings" to provide a controlled consent.
Cookie SettingsAccept All
Manage consent