Home Business Trust Deficit Leaving Diversity Data Untapped in UK and Ireland – Research
Our website publishes news, press releases, opinion and advertorials on various financial organizations, products and services which are commissioned from various Companies, Organizations, PR agencies, Bloggers etc. These commissioned articles are commercial in nature. This is not to be considered as financial advice and should be considered only for information purposes. It does not reflect the views or opinion of our website and is not to be considered an endorsement or a recommendation. We cannot guarantee the accuracy or applicability of any information provided with respect to your individual or personal circumstances. Please seek Professional advice from a qualified professional before making any financial decisions. We link to various third-party websites, affiliate sales networks, and to our advertising partners websites. When you view or click on certain links available on our articles, our partners may compensate us for displaying the content to you or make a purchase or fill a form. This will not incur any additional charges to you. To make things simpler for you to identity or distinguish advertised or sponsored articles or links, you may consider all articles or links hosted on our site as a commercial article placement. We will not be responsible for any loss you may suffer as a result of any omission or inaccuracy on the website.
Business

November 16, 2021
Editorial & Advertiser disclosureEditorial & Advertiser disclosureOur website provides you with information, news, press releases, Opinion and advertorials on various financial products and services. This is not to be considered as financial advice and should be considered only for information purposes. We cannot guarantee the accuracy or applicability of any information provided with respect to your individual or personal circumstances. Please seek Professional advice from a qualified professional before making any financial decisions. We link to various third party websites, affiliate sales networks, and may link to our advertising partners websites. Though we are tied up with various advertising and affiliate networks, this does not affect our analysis or opinion. When you view or click on certain links available on our articles, our partners may compensate us for displaying the content to you, or make a purchase or fill a form. This will not incur any additional charges to you. To make things simpler for you to identity or distinguish sponsored articles or links, you may consider all articles or links hosted on our site as a partner endorsed link.

New research conducted by Economist Impact and commissioned by Zellis has revealed enthusiasm among British and Irish workers to contribute to diversity, equity and inclusion (DEI) programmes by providing personal information. However, many organisations are far behind where they must be to build the trust needed to gather that data, most notably by a lack of clear communications and commitments to action.

The research, conducted at a time of intense scrutiny over corporate DEI efforts, combines the views of 1000 people currently employed in the UK and Ireland with the expert opinions of ten leading diversity and HR experts. The report, entitled Time to Act: Seven principles for effective DEI data gathering, provides a rich perspective on current concerns and barriers to diversity data collection and applies expert perspectives to offer seven principles an organisation can apply to improve.

Fiona Cannon OBE, Group Sustainable Business at Lloyds Banking Group and former Deputy-Chairs of the Equal Opportunities Commission, said of the research: “To be effective, inclusion and diversity needs to be treated like any other business issue. That means, as a starting point, understanding and analysing your data in order to develop a focused plan, set goals and monitor progress with clear accountability in place. If DEI is a priority for you, data has to be a priority. It’s as simple as that.”

Ready and willing… and cautious

Companies can no longer attribute poor DEI performance to employee hesitancy to offer up data. A clear majority of UK and Republic of Ireland-based employees are willing to disclose data pertaining to their demographic characteristics: 68% of respondents are “likely” or “very likely” to participate in such processes. Those who identified as a minority group are even more inclined to be “likely” or “very likely” to participate (75% compared with 66% who do not identify with a minority group).

This willingness is especially pronounced among people who recognise leadership efforts to improve diversity and foster culture of inclusion. Firms that have a poor track record on DEI suffer ‘chicken and egg’ paradox, where a lack of trust in commitment to diversity and inclusion is widespread are most likely to be starved of the data they need to enact effective DEI programmes. Only 42% of employees that believe their organisations have made no progress on DEI initiatives are “likely” or “very likely” to participate in data sharing, more than 20% less than among those at firms where some progress has been recognised.

Creating a culture of trust

The research does not find that all employees of are equally comfortable with disclosure. Only a third of racial and ethnic minorities and employees with a cognitive/mental or physical disability say they are “very likely” to participate in efforts to collect data, for instance, compared to 44% of individuals identifying as LGBTQ+. People who identify as a member of no minority group are notably the least likely of any group to express their willingness to share data.

When asked what factors are most likely to deter them from sharing data, trust and understanding in how data would be used emerges among the most significant factor. One third of respondents cite a lack of clarity about how the data will be used and why the data needs to be collected as the biggest deterrents. Over a quarter of employees are worried about “the anonymity of the data collected” and “how the data will be stored and protected”, illustrating how critical trust is to the offer of personal data. 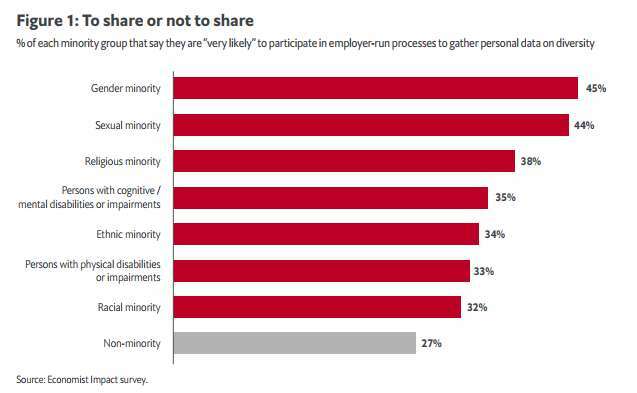 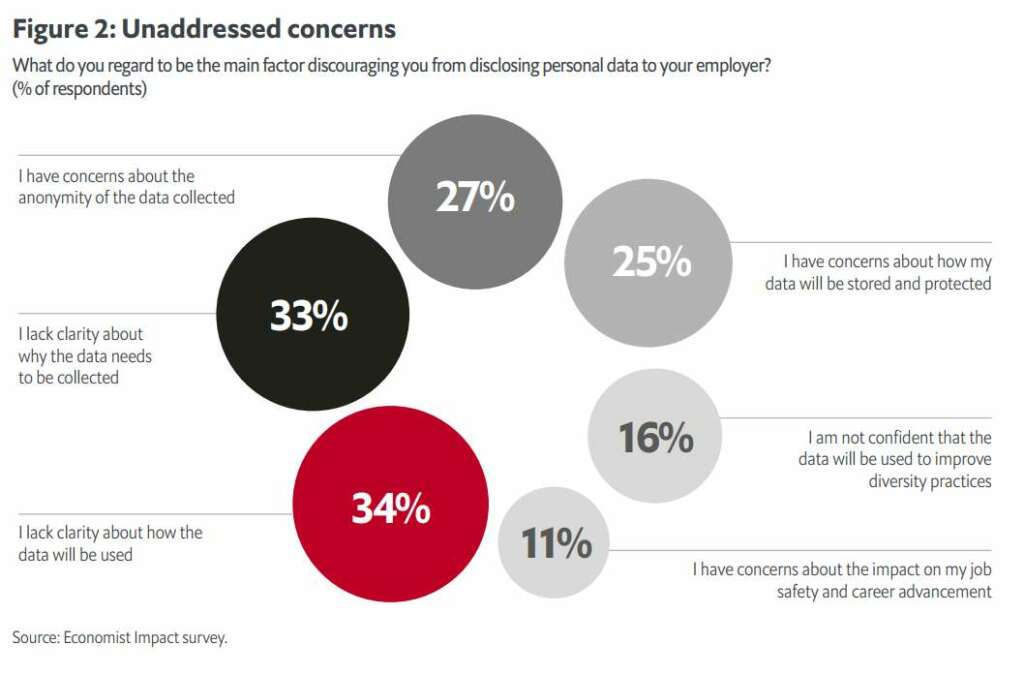 The survey also reveals a disconnect between the types of data employees think should be collected and the data employers are collecting. The most commonly requested data by employers is age, nationality and sex, but employees consider data on race and ethnicity and physical disability or impairment to be most important for the development and implementation of effective DEI strategy.

79% of Directors in Ireland Do Not Integrate...

Unlike dogs, a business strategy isn’t for life,...

November 16, 2022
We use cookies on our website to give you the most relevant experience by remembering your preferences and repeat visits. By clicking “Accept All”, you consent to the use of ALL the cookies. However, you may visit "Cookie Settings" to provide a controlled consent.
Cookie SettingsAccept All
Manage consent