Our website publishes news, press releases, opinion and advertorials on various financial organizations, products and services which are commissioned from various Companies, Organizations, PR agencies, Bloggers etc. These commissioned articles are commercial in nature. This is not to be considered as financial advice and should be considered only for information purposes. It does not reflect the views or opinion of our website and is not to be considered an endorsement or a recommendation. We cannot guarantee the accuracy or applicability of any information provided with respect to your individual or personal circumstances. Please seek Professional advice from a qualified professional before making any financial decisions. We link to various third-party websites, affiliate sales networks, and to our advertising partners websites. When you view or click on certain links available on our articles, our partners may compensate us for displaying the content to you or make a purchase or fill a form. This will not incur any additional charges to you. To make things simpler for you to identity or distinguish advertised or sponsored articles or links, you may consider all articles or links hosted on our site as a commercial article placement. We will not be responsible for any loss you may suffer as a result of any omission or inaccuracy on the website.
Home News Wait and see: U.S. companies curb investment as they await Fed moves
News

August 8, 2022
103
Editorial & Advertiser disclosureEditorial & Advertiser disclosureOur website provides you with information, news, press releases, Opinion and advertorials on various financial products and services. This is not to be considered as financial advice and should be considered only for information purposes. We cannot guarantee the accuracy or applicability of any information provided with respect to your individual or personal circumstances. Please seek Professional advice from a qualified professional before making any financial decisions. We link to various third party websites, affiliate sales networks, and may link to our advertising partners websites. Though we are tied up with various advertising and affiliate networks, this does not affect our analysis or opinion. When you view or click on certain links available on our articles, our partners may compensate us for displaying the content to you, or make a purchase or fill a form. This will not incur any additional charges to you. To make things simpler for you to identity or distinguish sponsored articles or links, you may consider all articles or links hosted on our site as a partner endorsed link.

Nonresidential fixed investment, which is how the Commerce Department lumps together things like spending by businesses on new buildings and renovations of existing ones, slipped 0.1% on an annualized basis in the second quarter. This acted as a drag on gross domestic product, the broadest measure of U.S. economic output. It also ended a seven-quarter run of outsized additions to GDP that on average were more than double the category’s historic contributions to growth.

The cutbacks hit every industry except mining and drilling.

Economists are watching closely to see how inflation hits different parts of the economy. Consumer spending has softened in the face of higher prices but still added to growth in the second quarter. 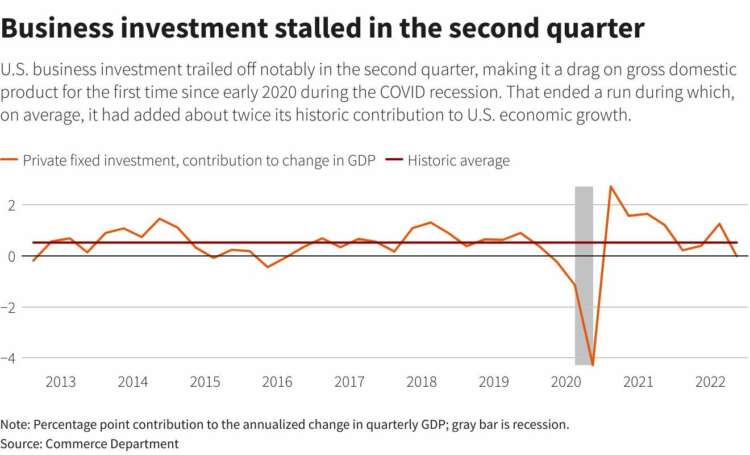 And even as companies curtailed adding new buildings and other expansions, they kept hiring. U.S. job growth accelerated in July, and the U.S. job market has now recovered to the level it was before the pandemic. Meanwhile the stress on global supply chains eased last month to its lowest level since January 2021, according to the New York Federal Reserve.

The pullback in business spending “is more of a pause than a sign of structural weakness,” said Andrew Hunt, who heads the Center for Real Estate at Marquette University in Milwaukee.

Hunt said a surge in rents and construction costs earlier this year – part of a wave of price increases that have pushed inflation to a four-decade high – caused some businesses to postpone adding new space. But the pullback will be temporary, he predicts. He noted that demand for space is so high and available space in such short supply that vacancy rates are below 5% and in some markets there is essentially no space available.

“People said, ‘Let’s see if the Fed does what they said they were going to do – and see how things stabilize as we move into the fall.'”

The Fed has lifted interest rates at each of its meetings beginning in March, including back-to-back outsized increases of three-quarters of a percentage point at its last two policy gatherings. Far-larger-than-expected payrolls gains for July, data for which was issued on Friday, puts a third hike of that size squarely in play for the next Fed meeting in September.

CBRE Group Inc., which tracks industrial property trends, also views the pullback on business spending as temporary – and concentrated only in some pockets of the industrial sector. The real estate company noted in a recent report there was a record-breaking 626.6 million square feet of new industrial construction underway nationally in the second quarter – nearly a third of which was already leased.

“Last year was the biggest industrial leasing year ever – over 1 billion feet in the U.S.,” said John Morris, president of the logistics business for the Americas at CBRE.

“This year looks like it won’t be quite as big,” he said, noting they project 850 million square feet will be leased. That would still mark the second-biggest year in their records.

Morris said the slowdown appears concentrated in smaller companies, rather than the big-name e-commerce and retail firms that gain the most attention for their investments in giant warehouses. Leasing of the biggest warehouses – those over 700,000 square feet – is up 25% in the first half of this year, compared to 2021, said Morris, while leasing of warehouses of 50,000 square feet or less is off 21%.

“If you think about who typically is leasing those (smaller) buildings,” it is more likely to be smaller companies, he said, adding that those firms may be more sensitive to costs like rising rents.

Craig Meyer, president of industrial for the Americas at Jones Lang LaSalle Inc., said surging costs have curbed investments in industrial space. But he remains optimistic.

“We talk to all our brokers about what will happen to the end of year. And all of their pipelines seem to be solid,” he said.

Companies in China distance themselves from Taiwan amid Pelosi backlash

February 3, 2023
We use cookies on our website to give you the most relevant experience by remembering your preferences and repeat visits. By clicking “Accept All”, you consent to the use of ALL the cookies. However, you may visit "Cookie Settings" to provide a controlled consent.
Cookie SettingsAccept All
Manage consent