Home Top Story Sovereign bond yields not yet reached a summit – Reuters poll
Our website publishes news, press releases, opinion and advertorials on various financial organizations, products and services which are commissioned from various Companies, Organizations, PR agencies, Bloggers etc. These commissioned articles are commercial in nature. This is not to be considered as financial advice and should be considered only for information purposes. It does not reflect the views or opinion of our website and is not to be considered an endorsement or a recommendation. We cannot guarantee the accuracy or applicability of any information provided with respect to your individual or personal circumstances. Please seek Professional advice from a qualified professional before making any financial decisions. We link to various third-party websites, affiliate sales networks, and to our advertising partners websites. When you view or click on certain links available on our articles, our partners may compensate us for displaying the content to you or make a purchase or fill a form. This will not incur any additional charges to you. To make things simpler for you to identity or distinguish advertised or sponsored articles or links, you may consider all articles or links hosted on our site as a commercial article placement. We will not be responsible for any loss you may suffer as a result of any omission or inaccuracy on the website.
Top Story

Sovereign bond yields not yet reached a summit – Reuters poll

September 20, 2022
Editorial & Advertiser disclosureEditorial & Advertiser disclosureOur website provides you with information, news, press releases, Opinion and advertorials on various financial products and services. This is not to be considered as financial advice and should be considered only for information purposes. We cannot guarantee the accuracy or applicability of any information provided with respect to your individual or personal circumstances. Please seek Professional advice from a qualified professional before making any financial decisions. We link to various third party websites, affiliate sales networks, and may link to our advertising partners websites. Though we are tied up with various advertising and affiliate networks, this does not affect our analysis or opinion. When you view or click on certain links available on our articles, our partners may compensate us for displaying the content to you, or make a purchase or fill a form. This will not incur any additional charges to you. To make things simpler for you to identity or distinguish sponsored articles or links, you may consider all articles or links hosted on our site as a partner endorsed link.

BENGALURU (Reuters) – The latest turmoil in major sovereign debt markets is far from over as bond strategists in a Reuters poll expected yields to stay elevated well into next year, with risks firmly skewed towards their moving higher than currently predicted.

More than a decade of rock-bottom sovereign bond yields came to an abrupt end earlier this year as major central banks, which kept them artificially subdued, dumped pandemic-era policies in pursuit of price stability which so far has remained elusive.

With inflation now running multiple times higher than major central bank targets, bond yields, along with policy rates, are unlikely to drop significantly in the short- to medium-term.

The Sept. 12-19 Reuters poll of over 40 fixed income strategists and economists showed major sovereign bond yields trading near current levels in one, three, six and 12 months from now.

However, given the backdrop of stubbornly high inflation, the bias was clearly for yields to move higher. An overwhelming 86% of strategists, 38 of 44, said that was the risk to their forecasts.

The U.S. Federal Reserve, which sets the rate for the cost of capital globally by default, was forecast to go for a third consecutive jumbo 75 basis point hike on Wednesday, with a one in five chance of a bigger 100 basis point hike. [ECILT/US]

While bond yields were forecast to remain high, much of the rise was expected to come from shorter duration securities, which are the most sensitive to central bank rate hikes. That is set to continue given the Fed is not yet close to being done.

“If clients are looking to take an outright duration long, we still recommend waiting until the Fed delivers the last hike. For now, the curve is still biased flatter with a hawkish Fed,” Cabana wrote.

There is no real consensus yet – but plenty of worry – about how far central banks need to go and how active they will be offloading their bloated balance sheets while raising rates.

Yields on U.S, German and UK two-year notes were trading at levels not seen for at least a decade as markets and economists expect the Fed, the European Central Bank and the Bank of England to continue raising interest rates.

“In the near-term the risks are to higher yields than we are currently forecasting,” said James Knightley, chief international economist at ING.

Poll medians showed U.S. Treasury two-year notes were expected to yield in a 3.6%-3.7% range over the next six months and then dip slightly to 3.3% in a year.

A sharp rise in short-term borrowing costs is likely to restrict economic activity and so also prevent yields on longer-term maturities from rising too much.

Benchmark 10-year bond yields for the U.S. and the UK were expected to dip below two-year notes in the next 12 months, inverting the yield curve, which in the past has forecast a recession was coming in the next 12-24 months. 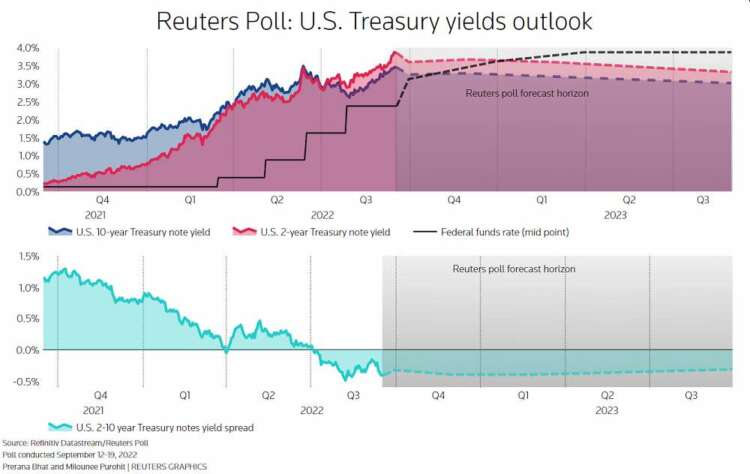 In the euro zone, the yield curve was expected to be at its flattest since the beginning of the global financial crisis back in 2007.

“The recent significant rise in rates has been global in nature and has been a function of central bank hiking expectations as well as rising term premiums,” noted Priya Misra, head of global rates strategy at TD Securities.

“We would argue that a faster pace of hikes by central banks and a higher terminal rate have been more dominant as evidenced by the flattening of the global sovereign curves.”

(For other stories on major government bond yields and money market rates:)

Bulgaria tenders for gas supplies to ride out energy crisis

September 23, 2022
We use cookies on our website to give you the most relevant experience by remembering your preferences and repeat visits. By clicking “Accept All”, you consent to the use of ALL the cookies. However, you may visit "Cookie Settings" to provide a controlled consent.
Cookie SettingsAccept All
Manage consent